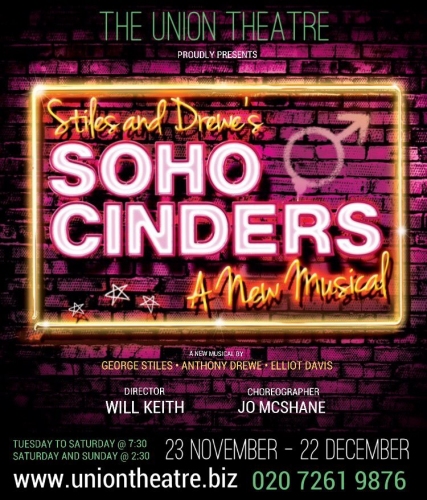 Soho Cinders at London’s Union Theatre has received a fairytale reception from critics and audiences alike…
★★★★★ “what a delight it is…super stuff!” Broadway World UK
★★★★★ “it’s a real treat” West End Wilma
★★★★ “it packs a powerful emotional punch…at its heart is the superbly accomplished score” Daily Express
★★★★ “Stiles + Drewe offer one of their best-ever scores” The Stage
★★★★ “a story with real heart...delightful" WhatsOnStage
★★★★ “The heart of the story beats as strong as ever” Gay Times
★★★★ “Yet another triumph for the uber-skilled Stiles + Drewe…did they ever write a bad tune?” Musical Theatre Review
★★★★ “A modern love story that breathes new life into a traditional format, a clever mix of old and new that would excite any theatre-goer” Theatre Weekly
★★★★ “the plot is so incredibly contemporary” London Theatre
★★★★ “Go see it – you won’t be disappointed” Jonathan Baz
★★★★ “provides a level of entertainment to rival even the best of pantomimes” ThereOughtToBeClowns
Join the party on Old Compton Street! Soho Cinders runs at The Union Theatre until the 22nd December: http://uniontheatre.biz/