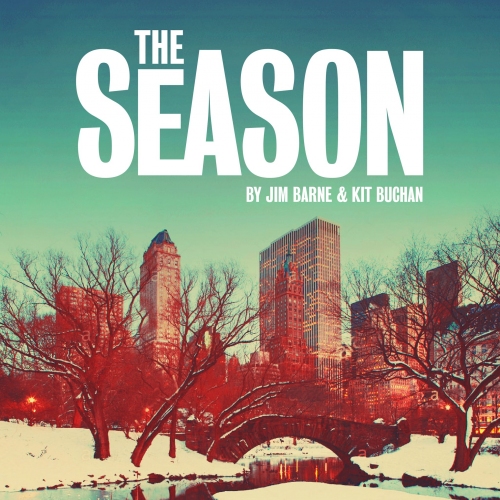 As part of our 2018 Mentorship Award, today we had our first Progress Lab for 'The Season' by Kit Buchan (book & lyrics) and Jim Barne (music).

Joined by the fabulous Tori Allen-Martin as Robyn and Daniel Buckley as Dougal, and director James Dacre (AD at Northampton's Royal and Derngate), Kit and Jim presented 40 minutes of Act 1 to us and our fellow panellists Jeremy Sams, Jake Brunger and Kate Golledge. We were also joined by a small audience of MMD members.

The Lab is a key part of the Mentorship Year whereby the writers have a chance to see and hear their work and discuss areas of concern with our industry panel. Dramaturgically we have found this to be a highly productive part of our developmental support, and opening the Lab up to MMD members is a reflection of our commitment to peer-to-peer learning and support.

The second Lab for The Season will be in the spring, date TBC. MMD members will be contacted about attending in due course.

Dougal arrives in New York to attend his father’s wedding. He’s never been to America, in fact he’s never flown before, and he’s never met his father before either. He steps off the plane at JFK wearing a Santa hat and sunglasses. It’s Christmas Eve.

Robin waits at arrivals. She’s hungover, she’s wearing pyjamas under her clothes, and she isn’t exactly happy about being at the airport on her day off. Her big sister is marrying Dougal’s father, tomorrow, on Christmas Day. She isn’t exactly happy about this, either.
Dougal likes bad jokes, Bing Crosby and It’s a Wonderful Life. Robin likes basketball, Chinatown and being alone. Stuck together for 24 hours, the two misfits traverse the city in a whirl of singing, bickering and bad weather, as the wedding inexorably approaches…

Sitting in the grand tradition of Christmas romance, The Season is a bittersweet, snow-covered comedy about Christmas, chemistry and the pursuit of happiness.